What do we mean by global warming? What does it mean, how does it work and why does it matter? Here is your chance to make your own film or animation to explain the greenhouse effect. 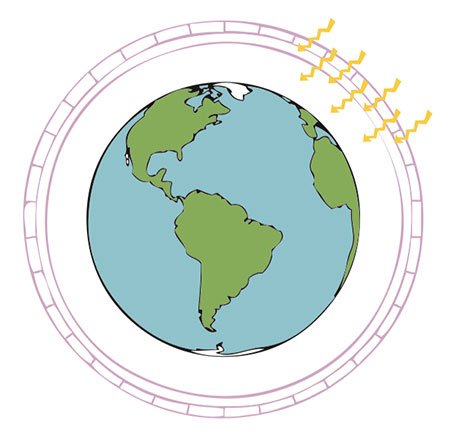 There are several gases that absorb infrared radiation. The most important one is carbon dioxide. Others are methane, nitrous oxide and water vapour.

In the last few decades, the layer of greenhouse gases has become thicker and thicker because more greenhouse gases have been released into the atmosphere, so more and more heat is trapped inside. This means that the average temperature on earth is rising.

Find out more about the greenhouse effect from NASA Climate Kids.

You can see how the greenhouse gas effect works if you put two thermometers on the same surface outside. Place a glass jar over one (like a mini greenhouse). Then check the temperatures of both thermometers after 20 minutes.

Gases such as carbon dioxide have the same effect on the earth as the glass jar does over the thermometer. This is why we call it the greenhouse effect.

Now you’ve heard about how the greenhouse effect works on the earth, come up with a short play or story showing how it works for others.

Either make a video recording of your play. You could use make-up and dressing up to show different roles.

You could incorporate the live demonstration with the thermometers as part of the video. Perhaps your video starts or ends with a documentary section?

Things to think about

Did acting it out help you to understand how the earth’s climate changes?

Can you already see changes due to the greenhouse effect in your life?

Why is it important to reduce the emission of greenhouse gases?

Share your video online with #DreamBigAtHome. Who else could you share your film with that could make a change on the greenhouse effect?

This activity was adapted from the Handbook for Action Against Climate Change from our partners at IFM-SEI. With lots of useful background information and more activities for groups on the climate emergency.

Try monitoring the climate near you by making some instruments to measure the Changing Weather.

This is one of our collection of activities that will help you to better understand the climate and ecological crisis and our part in it, as well as supporting you to raise your voice in calling for action to be taken against it.