Discover the story of Sadako Sasaki, a Japanese girl who became renowned for her incredible achievement of folding 1600 origami cranes. This was despite the fact she was suffering from terminal leukaemia caused by the radiation from the Hiroshima atomic bomb. This activity allows you to reflect on war and peace in the world today. Whilst learning to fold origami peace cranes like Sadako did.

Sadako Sasaki was a Japanese girl born in 1943, in Hiroshima.  She was two years old when the USA dropped an atomic bomb on Hiroshima, on 6th August 1945 as part of the second world war.  The bomb didn’t directly injure Sadako. However, nine years later she fell ill with leukaemia, a type of cancer. This disease was caused by her exposure to the radiation from the bomb. Nowadays most people survive leukaemia, but in 1954 most people did not. The cancer got worse very quickly and Sadako had to stay in hospital.

Her father told her a Japanese legend. If you fold one thousand paper cranes you will be granted a wish. Sadako started to fold them, she was tired and ill — and paper was hard to come by. But she managed to fold 1000.  She wished that she would get home soon and that her parents’ debts from buying her medicine would disappear. Then she started to fold another 1000 but she only managed to fold about 600 before she died.

Sadako’s friends wanted to keep her memory alive, so they collected money to build a statue of her. In 1958, they built a statue of Sadako holding a life-size golden crane in Hiroshima Peace Park and it was named the Children’s Peace Monument. At the bottom of the statue there is a plaque that says: ‘This is our cry, this is our prayer, peace in the world.’

Around the world people now know of Sadako’s story and she has become a global symbol of hope, of child victims of war and of peace. People all over the world fold their own paper cranes and wish for peace in the world. And that no more children will die or be injured in war.

Start with a square piece of paper, fold it in half to make a triangle, then open out and make a triangle the other way. Open the paper flat again and turn it over, fold in half first to make a wide rectangle and then a tall rectangle. Make all the creases very sharp and precise. Now, open it out again. 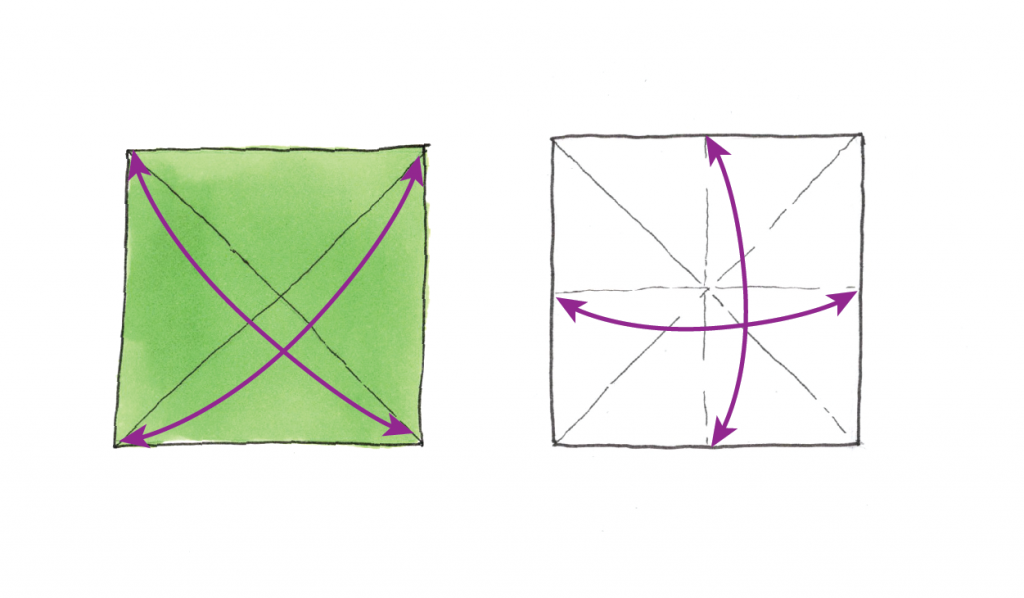 Bring the 4 corners together, using the folds you have made to form a flat square shape. There will be one end which is open and where all the corners meet, this should be facing you. 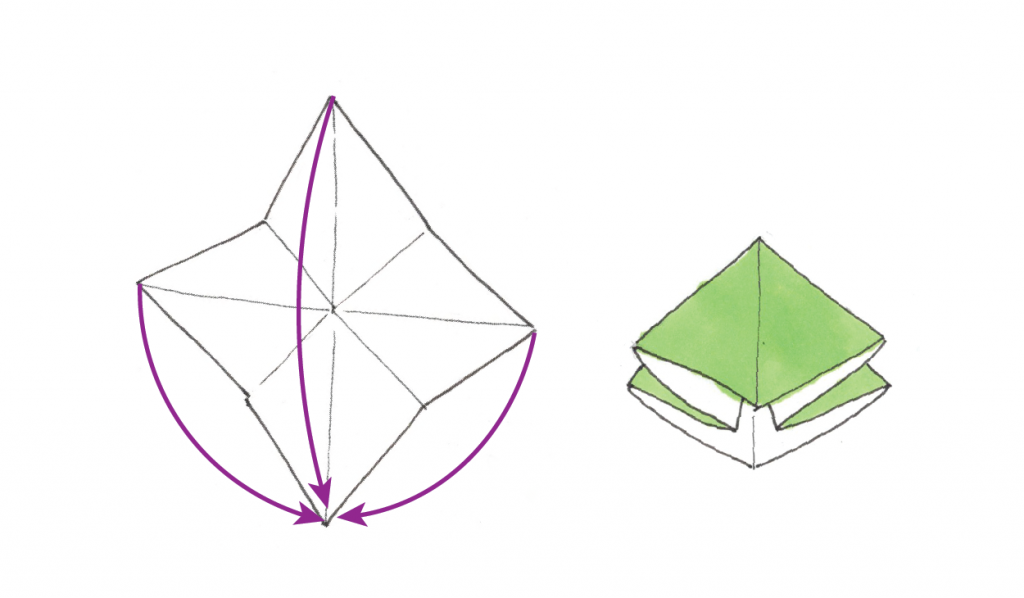 Fold the side corners to the middle and the top corner down to make sharp folds. Open it out back to the square.

Lift up the top layer of the bottom corner and bring it high up. After that, tuck the sides of that layer in to form a long diamond shape on top of a square behind. Turn over and repeat step 3 and 4 on the other side. You should now have a long diamond shape with ‘legs’ facing you. 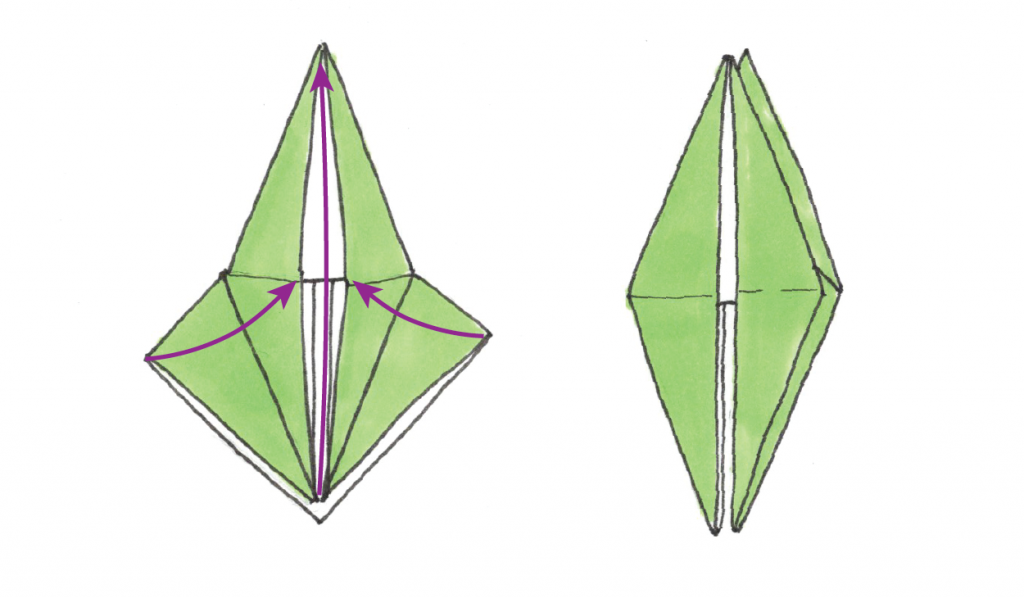 Fold the top layer into the centre, turn over and do the same on the other side. Then do a ‘book fold’ – take your outside corners and bring the top ones forward and the bottom ones back. The remaining shape should look like a wolf.

Turn the wolf’s nose up to the very tip of its ears, then turn over and do the same on the other side. These will become the crane’s neck and tail.

Now do another book fold. This folds the neck and tail inside the wings.

Pull the neck and tail out. Then redo the crease at the base of the crane to hold them in this position. Now fold one end down to form a head, and fold the wings down. 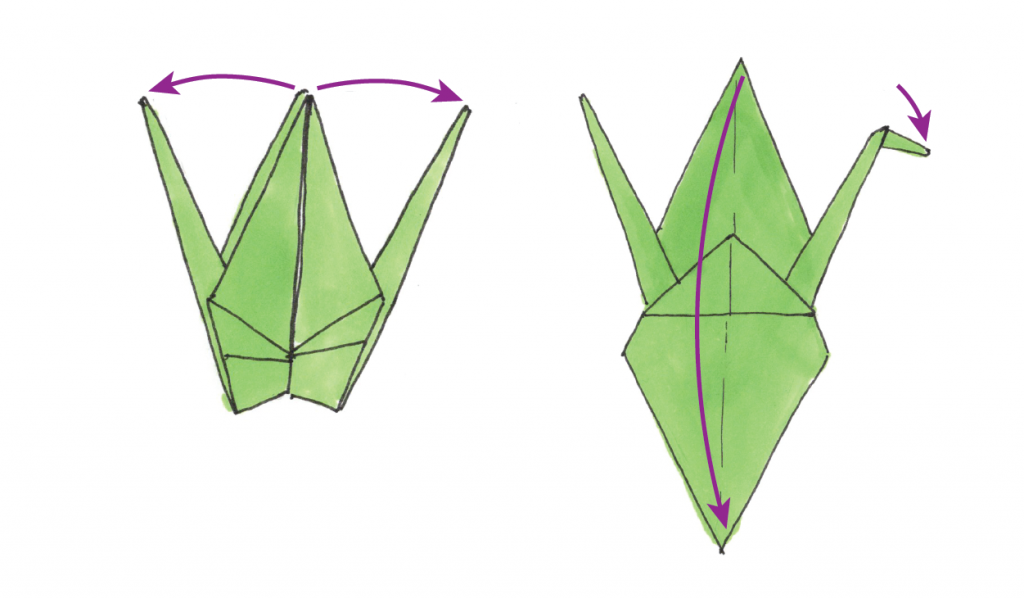 Finally, open out your crane gently and it is ready to fly. 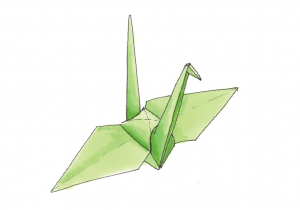 Other instructions for how to fold the peace cranes, and more details of Sadako’s story can be found here.

Think more about some of the symbols we use for peace by making some peace bunting. 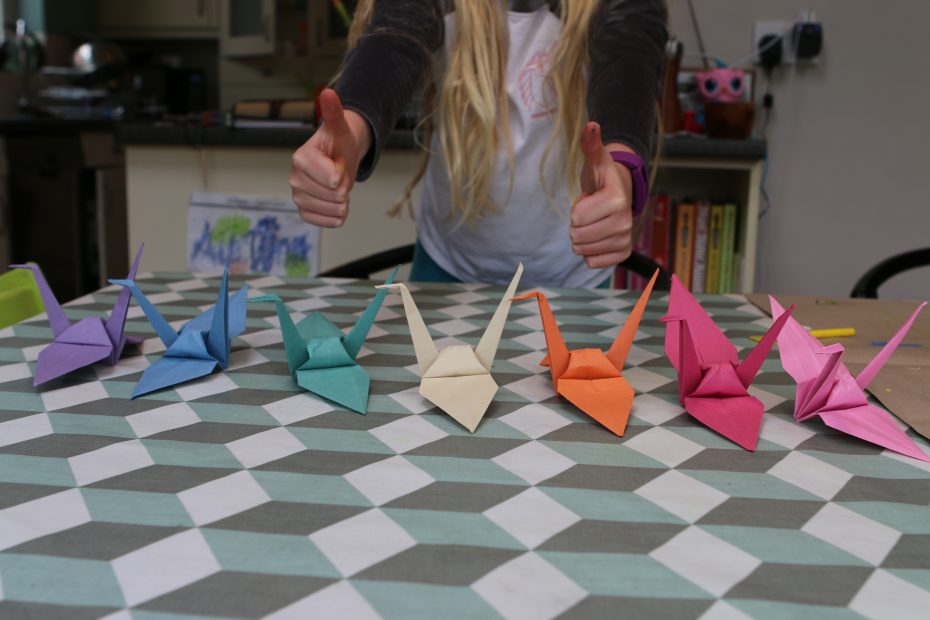